Inspiring Recovery Story from Nourishing Hope: Getting Your Hopes Up with Shamus

As the Project Manager of Community Development for Nourishing Hope, I was privileged in helping put together this remarkable story of hope, healing, and recovery for not only Shamus, who was diagnosed with moderate to severe autism, but for Anita his mother, and Kaitlyn, Shamus’ little sister.

Shamus was diagnosed with moderate to severe autism at age 2. When they began him on nutritional and biomedical protocols, his parents had no expectation of improved speech or ever “mainstreaming” their son. They just wanted him to sleep so they could cope with him being autistic.

Today at age 10, Shamus shows no signs of autism and has been classified as “fully recovered!” He’s in a mainstream classroom at school, his teachers love him and he has a great group of friends. Shamus is great at team sports, and exhibits no problems in the classroom whatsoever.

His mom says, “I think the future is really bright now.”

Shamus’ recovery was a result of 8 years of hard work by his parents, their practitioners, and Shamus.

Being their first child, his parents didn’t know what to expect, or even suspect was wrong initially. But things got worse as he got older, and it became more apparent there were problems….

didn’t like loud noises
have severe melt downs
projectile vomiting up to 9 times a day, regularly
waking up from 1-5 am every morning and scream and scream
very constipated and bloated
very skinny
huge dark circles under eyes
a huge head
Radical Downward Spiral Overnight

lining up toys
self-inflicting harm
leaving mom with black eyes, bruises
having up to twenty temper tantrums a day
huge cravings for milk
continued project vomiting
continued constipation
could not cope with any sort of noise, other children, different environments.

Shamus was taken to a general practitioner on several occasions…

“They told me Shamus’s problem was me, that I was an over anxious mother and that I had post-natal depression and they gave me Prozac. I threw the Prozac out, I didn’t believe that was the problem. I did do the 8 post-natal depression counseling for 6 weeks to prove a point. After the 6 weeks they said to me,’ you are the most together woman we know, you are just sleep deprived’ and said, ‘yes, because my baby doesn’t sleep!’”

Shamus wasn’t meeting milestones, no waving, no babbling, commando crawling. Anita thought he would catch up, but he was only falling further behind.

“I took him back to the doctor’s -this particular day he was really bad. They still didn’t think anything was wrong. When we got home that day, when I took him out of the car he had a seizure in my arms.”

“That’s when I knew we were in serious trouble. How could I possibly stay awake 24/7 to make sure he didn’t choke on his vomit?”

Then sleep deprivation hit a critical moment – Anita fell asleep at the wheel and nearly hit a power pole. A friend insisted she visit a homeopathy clinic. At that stage, the doctors were suggesting that Shamus go to a children’s home a couple nights a week so his parents can get some sleep.

“…that’s a slippery slope, they are going to take my child off me, so I closed in on myself and wouldn’t ask for help, the worse situation that any mother can be in, to not be able to ask for help.”

Read what Anita did (with nutrition and biomedical intervention with the right practitioners)….

Nourishing Hope Success Story: Getting Your Hopes Up with Shamus by Julie Matthews

About the Author: Holly Morello

I am a Portland, Oregon based Certified Nutritional Therapy Practitioner, writer, wife, & mom of 3 amazing spirited sons. My passion is to inspire hope and to help you and/or your loved ones overcome mental, emotional & behavioral challenges such as anxiety, ADD/ADHD, Asperger’s, and depression – as well as neurological dysfunctions such as sensory processing disorder and the associated health conditions that come with these challenges. In collaboration with your medical team, I support these issues through therapeutic diet and lifestyle programs so that you and your family can live purposeful, happy lives. I work with individuals and families both in-person and remotely, conduct group 21-Day Sugar Detox Classes (because getting control of sugar should be foundational to any healing protocol), and am available for media interviews and content contribution. Lastly, I've been a wrestling mom for 10 years now and have worked tirelessly, mastering an optimal performance and weight management plan for high school athletes. I’m happy to speak to groups and organizations who are interested in the topics I am most passionate about.

Honored to be listed in the 100 Best Nutrition Blogs 2015 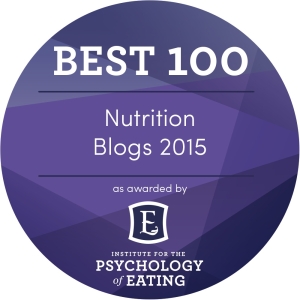